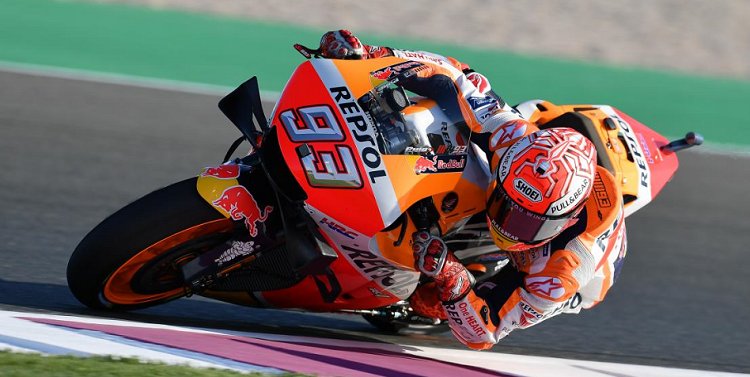 After the start was slightly delayed due to track conditions, it was a manic second session for the premier class as the time attacks came in, with the later time giving the riders the best chance to book an automatic Q2 place for Saturday’s qualifying. It was Marquez who set the fastest lap of the weekend with just over five minutes of FP2 gone, setting the tone for the rest of the session.

Rookie Joan Mir (Team Suzuki Ecstar) was the first to put the soft-soft tyre combination in and the 2017 Moto3™ World Champion set the timing screens alight to go over three-tenths clear of the field with just under 15 minutes to go.

Miller then took over at the top a couple of minutes later on board his GP19, before Franco Morbidelli (Petronas Yamaha SRT) produced the goods to fire himself to the summit – this coming after he had crashed at Turn 1 earlier in FP2, with his bike catching fire in the gravel. Andrea Dovizioso (Mission Winnow Ducati) then took over but shadowing Viñales, a prowling Marquez would have the last laugh to go 0.474 clear of the Yamaha rider to set a new outright lap record around the Losail International Circuit.

Viñales and Miller kept P2 and P3, with Danilo Petrucci (Mission Winnow Ducati) 0.673 back in fourth. Rookie Fabio Quartararo (Petronas Yamaha SRT) had a great session, the Frenchman rounding out the top five to easily get himself a provisional Q2 place, with Dovi eventually settling for P6. Morbidelli ends Friday in seventh, with Alex Rins (Team Suzuki Ecstar) jumping into the top ten on his final lap with a 1:54.320. Aleix Espargaro (Aprilia Racing Team Gresini) and Mir sit P9 and P10 respectively after strong sessions.

There are some big names missing from the top ten, and as things stand will have to go through Q1 in order to fight for pole. Jorge Lorenzo (Repsol Honda Team) ends P11 after finishing P2 in FP1, Cal Crutchlow (LCR Honda Castrol) sits just behind teammate Takaaki Nakagami (LCR Honda Idemitsu) in P13 and P12 respectively, with FP1 leader Valentino Rossi’s (Monster Energy Yamaha MotoGP) 1:55.048 only good enough for P16 at the end of the day – ‘The Doctor’ the only rider to not improve his time in FP2.

A belter of an FP2 session sets us up nicely for the first Saturday of the season. Will anyone be able to improve in FP3? Find out when the premier class head back out at 15:15 local time (GMT+3).