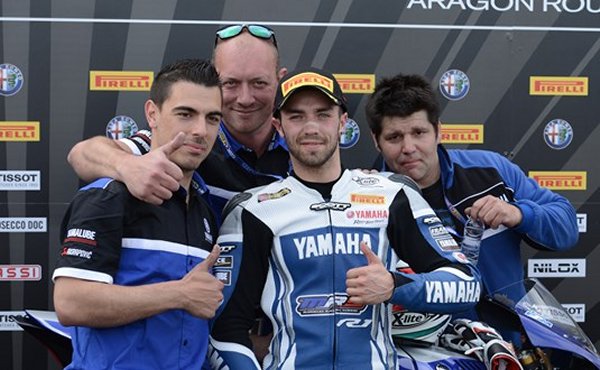 MRS Yamaha Team rider Kev Coghlan scored third place after the first competitive outing on the 2015 Yamaha YZF-R1M in the Superstock 1000 FIM Cup. Kev fought all the way for the win and only missed out by 1.485 seconds after 13 laps at a warm and dry Motorland Aragon.

With track temperatures higher than he had been able to experience fully in practice, Coghlan was still in contention all the way until near the end of the race. By that stage he was not able to continue his push towards the eventual top two podium riders, Roberto Tamburini and Luca Savadori.

Florian Marino did not find the best set-up to tackle the long and undulating 5.077km circuit in Spain on his MRS Yamaha Team YZF-R1M, despite a late change that improved his set-up for the race.  He took a seventh place and with it valuable championship points at the first of eight rounds in 2015.

Sylvain Barrier, G.M. Racing Yamaha Team, found the race a physical struggle after a practice crash, but he finished 11th in the race, one of five YZF-R1M riders inside the top few positions.

With championship positions mimicking race positions at round one Coghlan is third overall with 16 points, Marino seventh with nine points.

The next round comes along in only a few days time, at the iconic a**en circuit in the Netherlands, on Sunday 19th April.

“We had some grip issues front and rear towards the end, which was unusual as we have not had any bother with that all weekend. There was a bit more track temperature today and that was probably why. I am happy with that race for the first time out on the new Yamaha R1M. It is a great job from all the guys in MRS Yamaha and all the guys at Yamaha Motor Europe. Things can only move forward from here.”

“Unfortunately this weekend we just did not find race set-up for this track. We tried different things but I was out of where I should have been. To finish seventh was the best I could do but hopefully with the data from here I can move forward and learn from what we did this weekend. I believe we will get better for the next round in a**en.”

“This is a great start of the season. As our bike is so new we still have to get used to it. At the end of the race Kev was losing a bit out of the tighter corners due to grip issues. In the middle of the race grip was good and after that the grip went a little down, so to finish third in the first race is good. We never did a full race distance with these track temperatures. Florian did not find the perfect setting on his bike so it moved a lot on the brakes. We tried some new setting on his bikes after warm-up and it was better for the race.”